The series ‘From left to right and back’ reflects my personal experiences I had when re-learning to write. Growing up in former East Germany, I was forced to write with my right hand, even though I am a left-hander. The set of plates visualises my struggles, resulting from writing for 30 years with my non-dominant hand and the changes I went through after training myself to finally write with my left hand as an adult.

In Britain, around 13% of men and 11% of women are now officially left-handed, compared to just 3% of those born before 1910. Scientists estimate a much higher number of left handers than officially counted, which makes a lot of them hidden re-trained left handers. Possibly suffering from daily challenges like disturbance of memory and fine motor skills, dyslexia, lack of concentration or fear of failure. Through the series I intend to play upon the meaning of handedness and forced hand dominance in our contemporary culture. Aiming to create an awareness for left handers, their life in a right handed world and the effect of re-trained dominance on people’s personality and ability.

The two small plates are vintage plates from Germany, both showing screen prints of my handwriting – one of my left hand (repeating the word ‘links’, german for ‘left) the other of my right hand (repeating the word ‘rechts’, german for ‘right).
They are a permanent evidence of me writing the last time with my right hand and the first time with my left hand. 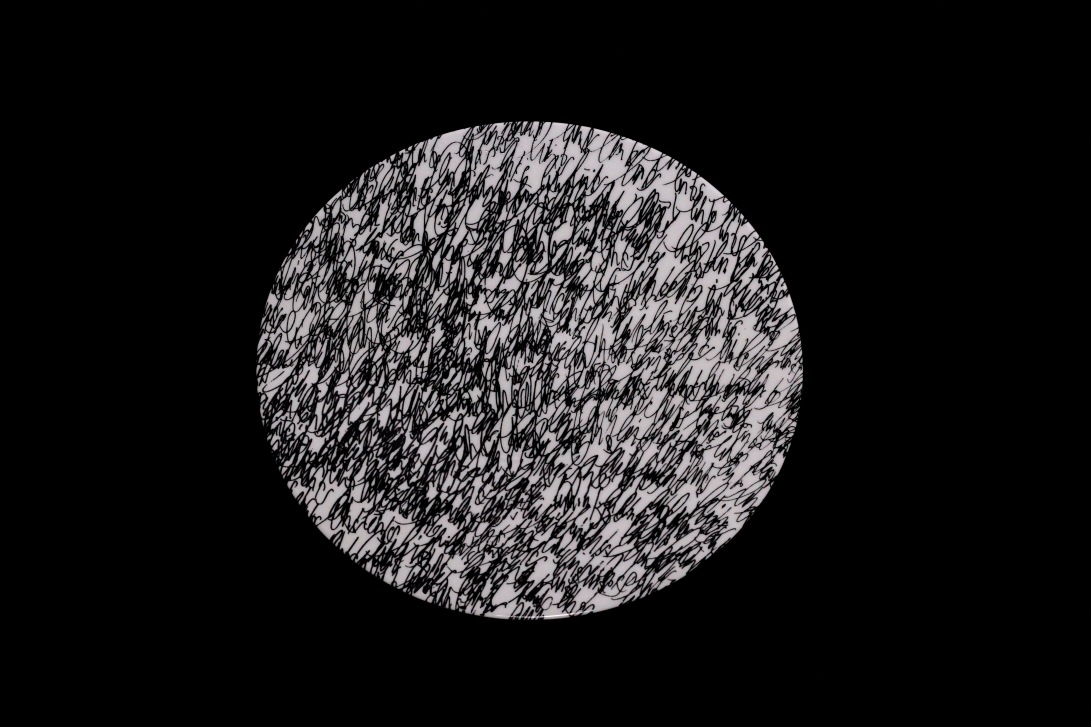 The single black and white printed plate shows a repetition of the word ‘links’ symbolising the long time and hard practice I went through when teaching myself to write with my left hand. I repeatedly wrote the same word again and again until it lost its meaning.

The two black and white plates showing one single word – ‘rechts’ (german for ‘right) and ‘links’ (german for ‘left) juxtaposing the different emotions I faced when writing with the two different hands. To represent the struggle I went to when writing with my right, non-dominant hand I used a stick that I covered in inc to write the word ‘rechts’.

All images I created on paper, with pen, brush and inc, then scanned the images and optimised it on the computer to finally create my own screen as part of the screen printing method. For the screen printing I used enamel paint, that was fired onto bone china at 980 degrees.